This article is to share my personal experience of moving my website from Godaddy to BlueHost & then finally to SiteGround. I will try to include my perspective of reasons, challenges, experience etc.

Here is a quick summary of my experiences which I will be explaining at length in further article.

I started my website with Godaddy several years back. It was pretty easy to get site up & running. I had no complaints technically. My website started as HTTP i.e. without SSL & I was fine with it because it was just a basic blog site & it was just starting up. Uptime of website was also impressive & GoDaddy technical support was pretty knowledgeable whenever I needed them. I was all happy with GoDaddy.

Need for SSL/HTTPS (For SEO)

As my website started growing I started thinking about SEO more and more. One of the important part of SEO is having a HTTPS website instead of HTTP. As per my research, not having SSL/HTTPS had downsides of staying behind in search rating. Also the browsers like chrome were showing website as ‘Not Secure’ in address bar which was google’s way to enforce website to prefer HTTPS even for simple websites.

Why I decided to move away from GoDaddy?

When I finally decided to move my site from HTTP to HTTPS, my first approach was to reach out to GoDaddy about the same, which I did.

I was having economy hosting plan with GoDaddy which did not include SSL for free. So I thought I would buy SSL certificate from elsewhere like from Comodo. I discussed the idea with GoDaddy support & asked for a way to install certificate if I buy from Comodo. Surprisingly, I got answer from support that they won’t allow outside SSL certificate & I will have to buy it from GoDaddy. It didn’t make sense to me but support was pretty firm on it. Then I inquired about options provided by GoDaddy to get SSL. Support told me that Basic economy plan that I had did not support SSL at all & I must upgrade my hosting plan if I wish to get SSL.

Then I started looking for different plans within GoDaddy & not-surprisingly, plans were pretty costly. On top of that there was a fine print notice for SSL that SSL was free only for a year & then I will have to pay original price for renewal which might be as high as $79.99/yr value. Now for simple small website like mine, it was a huge price. So after all this research & followups I was persuaded that things are not going to work for me with GoDaddy if I want to move to SSL/HTTPS. So I decided to move my hosting out of GoDaddy.

After my decision to move out of GoDaddy, I started researching for better options for new host for my website.

My criteria for research were –

After personal research for several weeks, I shortlisted BlueHost, HostGator, SiteGround, A2Hosting. There were lot of other options too but after going through several features I personally shortlisted above hosting sites.

Why I chose Bluehost?

Out of all shortlisted, I chose BlueHost because it was officially recommended by WordPress as a top choice. 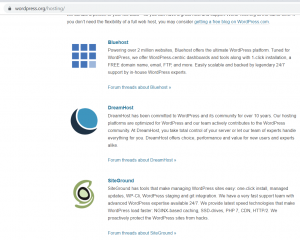 I also went through several reviews online & they were not that great or not that bad. Uptime wise, it was great as per reviews but support wise several folks were unhappy. But since it was officially recommended by wordpress at top spot, I was very much inclined towards it.

Bluehost plans were very cheap & packed with lots & lots of feature including free SSL. Being recommended by wordpress I also assumed that they will be experts in wordpress. They did not provide free site migration on basic plans but it was available for purchase. As per my needs, I decided to go with ‘Choice Plus’ plan of BlueHost which was middle level plan which had unlimited websites & unlimited storage which was very appealing. It also offered very discounted rate at the time of purchase for 3 years which was even more appealing.

So finally I purchased ‘Choice Plus’ plan & decided to do website migration myself (I am a software developer myself so I was able to learn & do it myself). I did website migration & my website was up & running with a temporary URL on BlueHost. I decided to give few days with temporary URL & test out whole website before pointing nameservers to BlueHost. After migration, things were all good, but then horror began. When I logged in to BlueHost hosting/cPanel with my credentials, I started seeing blank page. Yes you read it right, blank empty page instead of cPanel or dashboard of Bluehost. I tested my temporary website & luckily that was working fine. So I started my followup with BlueHost support.

I am a software developer myself, so I knew what blank screen cause might be i.e. mostly some issue with one of the Javascripts on the page which breaks before whole page is rendered. So to help technical support, I decided to capture browser logs using Chrome browser developers tool. Below screenshot shows how blank screen looked like & the error that I was getting. Even to help more, I also tested this from all devices & browser I had just in case it was issue with some browser but it was same issue everywhere. 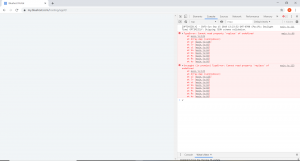 Then I started having several chat discussions with BlueHost support. I explained them issue & also gave them the error I saw. Initially all chat support persons went through same classic remedies (which I had done already) i.e. clear browser cache, try different browser, try different URLs provided by them etc. but everywhere I was getting same issue. So I thought I have done enough to give all possible information to them & I should give them some time to look into this. BUT … I had to keep in mind that all this must be resolved before 30-day money back guarantee otherwise I was going to be locked-in for 3 years. There was a support ticket raised so I decided to wait on that.

Then I waited for days & then contacted back & I again was treated as if I am informing about issue for the first time. I told them that I gave all my details already & its javascript issue. Asked them, did anyone look into this. Looking at their responses, it didn’t look like anyone was even looking into this issue. Then I asked them to check the ticket that was raised in earlier chat sessions. To my nightmare, that ticket was already CLOSED !!! What ??? I asked them why was it closed when my issue still exists, but support just tried to cover up & said if I want them to look into it I should provide all information & raise new ticket (Tone was bit unapologetic). So I had another ticket raised.

Now even this ticket there were lot more days spent. I followed up again on chat, but they answered that I will receive update on email & chat support can’t give any updates so I should wait. Then I received update asking about the screenshot for very first time. So all these days no one even cared to ask what experience I was getting & now they reached to that point. I kept patience & gave screenshot which is present above. Then again I waited just to receive another update that their technical experts are still looking into it.

Then after few days I got update that this issue was happening because I had some malware carried during my manual migration & they provided list of files marked a malware. All those files were some unused wordpress themes. I just went ahead & deleted all unused themes. But still it did not help. All malware scans were fine now but issue still remained.

Need to take it to social media to get attention

Now weeks had past with followups & I was still waiting. So I decided to take it to social media thinking that might catch their attention & might expedite solution. Ironically BlueHost had shared a detailed article about “How to avoid blank screen?” in one for their posts. So I did exactly what you thought. I replied to that post & informed them that their own site was giving blank screen & support is not solving the issue in weeks. So their facebook support pinged me facebook chat & started asking for details (again!). I gave it (again!) & then whole cycle repeated with email asking more time etc. I won’t bore you with more of same story.

30-day money back guarantee to rescue

Finally my 30-day money back guarantee period was nearing to end, so I decided to just end this. I replied to the support email that I am done & I want to cancel my account. Now to be honest, at this point I did expect some sympathy, but alas! I simply got reply from person who was assigned to complete my cancellation & they asked me to clear out everything & get it ready for cancellation. I anyways hadn’t done much in BlueHost so I simply asked them to go ahead with cancellation.

Now after horrible experience of BlueHost, I did not do much for a month as I regretted my decision about BlueHost. I was scared to get into same trouble again. After a month or so I again gathered courage & went back to my shortlisted hosting companies.

Why I chose SiteGround?

Now to my surprise, HostGator & BlueHost belonged to the same parent company Endurance International Group. So HostGator was obviously out of question. I did not want anything that related to BlueHost in any way.

SiteGround was another hosting in my shortlist which was also in WordPress recommendations. Its plans were slightly costly than BlueHost & also it did not offer unlimited storage. In fact it had lesser storage that GoDaddy. GoDaddy economy plan gave 100GB whereas SiteGround basic plan gave 10GB.

But when I checked SiteGround reviews, they were far better than BlueHost & had overall positive vibe (I really needed that!). They offered free SSL lifelong with expert wordpress support. They also had several promising features like free backups, cloudefare, caching etc. which appealed me a lot even though storage was less. So I decided to go with SiteGround finally.

I purchased ‘StartUp’ plan of SiteGround. Purchase was very easy & initial things were setup pretty fast. Their middle plan ‘GrowBig’ had free professional site transfer. But since I took very basic plan I had to do website migration myself which I was fine with. I picked one of the Saturday & started migration. I had few doubts as I was doing migration, but help was just few clicks away. Technical support was really technical as they gave me advise real-time as I was doing things. Within few hours I created website, created SSH/FTP accounts, migrated site & set it up. Had to ping support chat couple of times & they were happy to assist whenever I needed. Support reply was also very quick on chat.

So by afternoon my website was up & running on temporary URL & things were pretty smooth & without any technical glitch. I did testing & everything looked very fine. Having technically sound support, gave me enough confidence to point my live website to SiteGround on same day which I did. So by end of day my live website was up & running on SiteGround & it was also converted to SSL/HTTPS with proper redirects. I kept eye on it & kept testing for several days after that & did not see any issues. I even had few more deployments after that & all went smooth. So finally I was happily with migrated to new hosting !

Now disclaimer, everything that is said above is my own personal experience. Its not necessary that everyone got or will get the same experience. So take it with a pinch of salt. Do research of features that are important to you, read latest reviews & decide whats best for you. Hope this article helped!